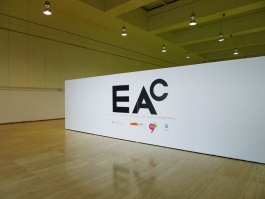 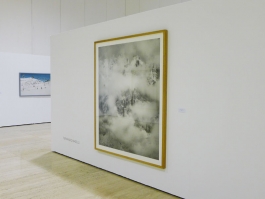 In 1785, after a failed attempt to climb the Mont Blanc, Swiss geologist Horace Benedict de Saussure -founder of alpinism- describes his experience on the mountains as follows: "the silence and deep calm that dominated that immense space, even enlarged by imagination, brought with them -so to speak- horror. It seemed to me that I endured in the Whole, a Whole whose corpse I saw, beneath my feet. In that situation, rather than the Mont Blanc, I directed my gaze to solitude. There, the bright, fluorescent snow gave an impression of movement and life."

Argentine photographer Fernando Maselli, just like painter Caspar Friedrich – one of the most outstanding painters of German Romanticism- portrays nature in a truly breathtaking way. Both climb up the mountain, to peep over the abyss that infinity and void (always) produce. The Portrait by Fernando Maselli, as in the artwork Wanderer above the Sea of Fog by Friedrich, faces his own isolation – loaded with certain terror and melancholy- where clouds, snow and mountain rocks become the only witnesses to the presence of man. The absence of the being, in Maselli’s photography, makes us feel identified with the lonely observer in Friedrich’s painting: leaning on his wooden cane on top of the mountain, the character contemplates the strange and moving force that – before his eyes- produces a sea of mist and silence. Fernando Maselli climbs up the mountain carrying his camera and tripod to capture -from every possible angle – the secrets hidden at the summit of the Dolomiti di Brenta, located in northern Italy.

Now, I suggest we imagine the moment before the photo is captured. Imagine that lonely character in Friedrich’s work is Fernando Maselli himself: a young photographer who keeps standing with his back to the viewer, sober and elegant, at about 3173 meters of altitude above sea level, contemplating the immensity of landscape with admiration and respect. It has been a tough and exhausting climb to reach the highest summit on the Dolomiti di Brenta, where Maselli feels, deep in his heart, the power (I assume) mountains give. Thus, in the bowels of wild nature, Maselli -exercising humbleness- accepts his littleness (his ‘almost-nothing’), faced with immensity and emptiness, of a landscape dyed in white. At that moment, what kind of experience do mountains provide?, how does the subject act?, where is the ‘being’, when there’s only abyss left? As Burke said, in his book On the Sublime and Beautiful:
“Passion, caused by the great and the sublime in nature, is amazement; and amazement is that state of soul, in which all movements are suspended with a certain degree of horror.” Facing the unlimited dimension of void and silence, the subject -alone and (now) without protection- is helpless, unable to cope with the the mountain’s capricious will. Now, cloaked in that fog blanket, the subject -in Lacanian terms- feels the strike of reality and is left speechless. Therefore, without resorting to the comfort of rational discursive language, the subject finds shelter in silence. And in that moment, when immensity pierces the ‘being’, fear and amazement appear. Thus, as Burke explains, nature has the potential to cause extreme emotional states in the subject, altering the stability (always) provided by the ‘being’, taking the subject beyond his own internal limits. However, not all natural phenomena have the ability to penetrate the inner ‘being’ in the subject, jeopardizing his integrity and (why not) his life. Only sublime experiences (rather than beautiful ones) break the homogeneity and consistency in the subject, where the ‘being’ -vulnerable though powerful – discovers ecstasy and anguish. In this sense, according to the distinction made by Kant, in his book Observations on the Feeling of the Beautiful and Sublime:The view from a snow capped mountain whose peaks rise above the clouds, the description of a raging storm or the Hell painted by Milton, produce pleasure, though linked to terror. These are experiences of the sublime. Instead, the contemplation of flowering fields and valleys crossed by winding streams, full of grazing herds, also provide a pleasant feeling, but a cheerful and smiling one. They are experiences of the beauty. Tall oaks and somber isolation in the sacred forest, are sublime; flower patches, low hedges and trees trimmed in shapes, are beautiful. Night is sublime, day is beautiful.

Maselli, departing from this Kantian distinction (and heavily influenced by Burke), tries to capture the vastness of the Dolomiti di Brenta, but without the camera becoming -as language does- a distance tool that minimizes the horror and anguish experienced by the subject, faced against the unlimited magnitude of the mountain. Maselli, therefore, does not capture the ‘beautiful’ -the flowery countryside and valleys with streams Kant talks about- but his intention is to capture the ‘sublime’ -those snowed mountains, as Kant says, that rise above the clouds. Perhaps for that reason, so that his work does not lose the horror (and pleasure) of the sublime, Fernando Maselli makes use of digital collage, transforming the dimension of reality beyond the theory of representation. This way, in order to register not only what is seen, but also what is felt, Maselli builds an artificial landscape, based on fragments, cuttings, repetitions and overlaps in a scrupulous and patient work aimed at shocking the viewer. Therefore, in order to create a mystical and heartbreaking atmosphere, Maselli reinvents new settings and recreates imaginary peaks that have never existed in the Italian Alps, where the fog -in a game between the visible and invisible- helps to create a landscape that drags the subject to his inner self, where he discovers joy and silence. After all, as Italian mountaineer Alexandro Gogna said: “The way to the top, alone, is like a journey into oneself.”

Thus, in conclusion, photographer Fernando Maselli’s personal and longing view, invites us on a solo trip into the unknown, through the mountains; it is an iniciation journey – without crampons or ice axes- carried out with the displacement (always) provided by imagination, allowing the viewer to identify himself both with Maselli, and with Friedrich’s walker on a sea of mist.