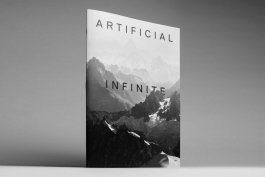 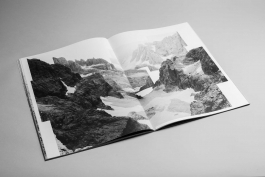 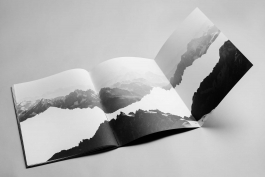 The artist is a creator of worlds. As much as he fables, however, the matter he uses comes from the Earth and returns back to it, like stone, water or the cycle of life. The artist can paint with photographs or compose new planets based on the forms in ours. Thus his work becomes a new reality, somehow shaping non-existent landscapes craftily designed from real scenery.

The artist builds ideal mountains that rise and grow in number out of our world’s tangible mountains, and they only exist in his way of viewing the world and expressing it graphically to sympathetic observers. He struggles to climb up to the edge of an abyss, reaches a precipice in the rock, looks around and spends a day and a night exposed to the elements, gazing in solitude at the light reflecting off of stone mirrors, coming in around corners and giving a sombre aspect to the niches of his limited vantage point. Thus, if we want it to, the landscape grows, recurs, stretches out and expands on its own terms in the eyes of those who behold it, acquiring a sublime magnitude. The beautiful is reproduced and amplified, engendering another dimension of itself.

Burke and Kant were probably right to a certain extent. However, what is beautiful may be sublime, and the sublime beautiful. There is no point in distinguishing them now that centuries have passed. We can turn the sublime into an enhanced dimension of the beautiful. To Burke, the beautiful had to be small and the sublime large: to produce sublime scenes, we therefore magnify worlds. However, if you look very closely at the universe found in an open geode, the crystalline landscape is as sublime as a mountain range that cuts through the clouds. And those who see an immense mountain are surprised by greater beauty than they are when watching a flowerpot.

The artist we have been discussing deals with the notion of the artificial infinite on the basis, of the infinite (or a sensation of the infinite) achieved through the technique of repeating the uniform, which Burke applied to a certain architecture, used in this case with mountains, which are also architectural. It would be more accurate to say it involves an aesthetics of construction. This allows the artist to design worlds where I feel like staying. Entering, exploring, watching and living in those places, in potential versions of themselves. Scaling such a great pile of stones, hearing them roll as I pass by, going in through that fissure, sitting at the edge of that precipice, moving towards the light, gazing from those heights, actually being there as if it were a real place, conquering those endless peaks that have unfurled before me onto successively misty canvases as superlative mountains.

These recreated landscapes have won me over, though I am not sure whether they are damaging to my worship of the forms in true nature. Maselli has copied my mountains, as if he possessed miraculous powers. I may seek them out later without finding them, as is the case with well-told tales. His pictures of artificial, sublime and infinite expanses allow for no easy return to commonplace geography.

As Poe once said and the great Magritte later attempted to paint, true art is greater than natural reality, so the writer invented a gardener who improved the landscape through his work. Maselli is a gardener of mountains. He plants them, trims them and places them in different locations. He has gone out to gather seeds in faraway, dangerous places and uses them to build worlds as if he were living the ninth day of creation.